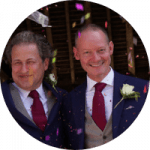 Exactly three weeks before the day Keith was due to get married, he ruptured a disc in his back. Keith tells his story of how he got back to health just in time for his wedding…

Exactly three weeks before the day I was due to get married, I ruptured a disc in my back, lifting sheep feed. I had to move about 40 bags of the stuff, each weighing 25kg, and I got a bit lazy and complacent when I reached the last one. Instead of bending my knees as you’re supposed to, and as I have done for years, I bent down and lifted it up with my arms. I managed to get it about four inches off the floor before I felt something give in my lower back. The pain went away five minutes later, and I carried on through the rest of the day as normal, thinking I’d dodged a bullet. Then, later that evening, after coming out of the shower, I crumpled onto the bathroom floor like I’d been shot in the hip and groin. Fortunately, thanks in part to the previous back surgeries I’ve had, I have a high pain threshold, so I managed to crawl to the bedroom and call an ambulance.

They said they’d be four hours—we live in the middle of nowhere —so I drove the 18 miles to our local casualty centre, where I was x-rayed and told I’d pulled a muscle. I couldn’t believe the pain of a pulled muscle could be that bad. I thought I’d go mad with it—and when it didn’t subside over the next few days, I called Mr John Sutcliffe, the surgeon at The London Clinic who had operated on my back previously. He said, “If you can get to me, I will look at it.” I fell onto a train, into a taxi, out at Harley Street and into the hospital, where I was scanned immediately. An hour and a half later, I was in John’s office and he was pointing at disc L3 in my back saying, “Look at this massive rupture.” John sent me home, promising to sort it ASAP—and within 24 hours he was on the phone, telling me about this surgeon called Michael Hess, who is based in Germany and who, fortunately, was free the coming Saturday to fly over to London. Michael was the only surgeon, John said, who could operate on me endoscopically.

This was now two weeks before the wedding, and we were terrified: we’d planned everything, and had guests coming from as far as Los Angeles who had booked flights months previously. By the time Saturday rolled round I crawled into the clinic—I could hardly walk by this stage—but as usual everyone there was absolutely lovely. The operation they run at The London Clinic is just incredible. They hold your hand through everything.

After a short wait, the door opened and Michael Hess walked in. He introduced himself to me and my partner, asked me what exactly had happened and carried out an examination. He then began to explain the surgery in great detail, which was brilliant as I am one of those people who absolutely needs to know what’s going on and why. Still, when he told me he was confident that when I woke up the next morning, I would be almost back to normal, I just thought, bless your heart. I honestly couldn’t believe that anything would take away that much pain, that quickly. The last back surgery I’d undergone had required me to go through a lengthy period of recovery and rehabilitation. It was unbelievable to me that someone could make the tiniest incision, do all the necessary work and take away all that pain.

Despite my doubts, by the time Michael came to see me the next morning, the pain was reduced by about 90% and I was up and walking. There was a bit of residual pain, as John and Michael had told me to expect—the nerves had been crushed, then released, and they don’t like that—but it was nothing in comparison to what it had been. For 10 days I hadn’t slept more than 20 minutes at a stretch. Suddenly I was sleeping for a full seven hours. I am still in complete awe and wonder at what they’ve done. John could have given me heavy drugs or an injection to enable me to struggle through the wedding, then carried out a conventional operation later—but he knew how important this was to us, and he knew what was possible. He knew there was someone who could perform an incredible procedure and enable me to walk out like I hadn’t had any surgery at all.

Such was Michael’s level of care, before he went back to Germany he wrote down his landline, mobile and email, and told me I could contact him at any time, day or night. He and John were anxious to stress that while I was feeling good and only a tiny incision had been made, I mustn’t forget I’d had major surgery, so for a while I was so terrified of doing any further damage I was in complete lockdown. I didn’t lift a thing or run anywhere. After about a week, I felt comfortable unloading the dishwasher.

Throughout all this The London Clinic was just amazing: I got calls from nurses asking how I was and if I was happy with everything, which from a patient’s point of view was just so comforting and encouraging. I am so grateful to John Sutcliffe: for finding Michael and for driving this brilliant standard of care. I am just eternally grateful. I hope to goodness you don’t ever have to experience back problems, but if you do, I could not recommend The London Clinic more. 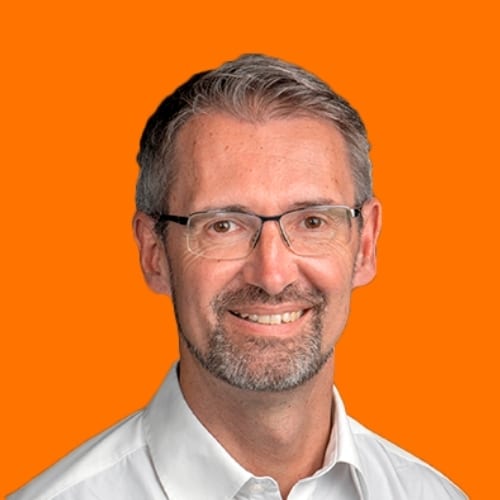 The intradiscal pressure you experience when you bend forward with a round back and lift a 25kg load is about 2.5 megapascals: that is 10 times the pressure of a normal car tyre, and 500% more when compared to just standing upright. It’s a tremendous load, and unfortunately, that’s what Keith put through his lower back when he lifted the very last bag of feed.

Though he had undergone disc surgery before, I really doubt this contributed towards his injury: the surgery he had five years ago was a total cohesive implant of discs two levels below the one that was injured, and the big advantage of such an implant is that it maintains and preserves motion, so there is not an increase of loads on the adjacent discs.

Nevertheless, having had this past experience, Keith knew that the pain and the numbness in his right leg were not the result of an ordinary muscle tear. My colleague John Sutcliffe attributed the numbness in the right leg to a specific nerve, and this clinical finding corresponded to the MRI scan which showed a huge extruded disc fragment in the level 3-4, on the right-hand side.

The size and position of the fragment made it difficult to operate conventionally. It was in the foramina, which is the part of the spine between two vertebrae, where the nerves exit to the side and run down to the legs, and this section is surrounded by bone. If the disc herniation is there, the nerve is squeezed against the bone and severely compromised, which is why Keith found the injury so painful. If you were to operate with conventional open surgery techniques, you would have to remove parts of the bone to reach the area, which could cause additional damage.

So, where the lateral, endoscopic approach has a huge advantage is that you don’t need to take away bone because you approach with just a 1cm incision, from the side. With these techniques, I can operate on 95% of all disc herniations in the lumber spine that require surgery. The patient lies prone—it is done with local anaesthesia, not general, which is another advantage—and a canula is inserted in the incision and placed in the foramina, all under x-ray control. Once this is achieved, the optical system is inserted, and under direct view, with a small instrument the nerve is mobilised and the disc fragment is removed.

The whole procedure takes about half an hour. Recovery is quick: when I saw Keith just one and a half hours after the procedure, he said the numbness had decreased. By the next day, the pain was 90% better. Removing the fragment had an almost immediate effect.

It is not always such a dramatic improvement. Keith had the advantage that he sought help so rapidly, so his symptoms were there for only two weeks before the operation. Some patients have pain for years and years before treatment, and then it may take several days or weeks for the pain to subside significantly. Still, this technique is beneficial and very doable, even if you’ve been struggling for a long time.