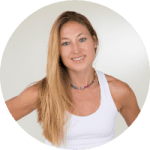 Bettina’s story illustrates that despite a fit and healthy lifestyle, and years of non-surgical treatment, major surgery is sometimes inevitable. But even more so, it illustrates how effective fusion surgery can be…

Bettina is a civil engineer, but her passion is sport and fitness. For over 20 years she has been teaching yoga, pilates, cycling and HIIT classes and is a master instructor for yoga and pilates.

Since about 2010 she has experienced episodes of low back pain (LBP), which initially responded well to anti-inflammatory medication, then to local injections.

And of course she did about a hundred sessions of different kinds of physiotherapy.

However, these episodes started to occur more frequently and to last longer and from 2015 on she suffered chronic lower back pain.

While she still managed to teach 20 hours of classes per week, she woke up every night due to severe pain, almost unable to turn around, and crawled out of bed in the morning with a terribly stiff and aching back.

Of course, she always wanted to avoid surgery, but after having tried all suitable other options, her lower back pain was unresolved and severely affecting her daily activities and mood.

She decided to undergo major surgery of the two lowest lumbar segments in June 2019: A fusion of L5/S1 and a total disc replacement in L4/5. Not everything went as planned, as a part of the sacrum broke off after a few weeks and another fusion surgery from behind with screws and rods was necessary to stabilize L5/S1.

As a fit person having had lots of physiotherapy, it was clear this was an advantage and helped her fast recovery.

She started to teach classes 8 weeks after the second surgery. The low back pain has subsided completely, bending forward is as good as it used to be and only getting into a handstand is slightly more difficult.

Below are Bettina’s X-Rays, which she has kindly let us use to show just how extensive her surgery was, and despite this extensive surgery, she’s able to carry out so many of the physical activities she loves with no pain.